There are many ways to incorporate circus into courses on 18th- and 19th-c topics. Here is a course outline for English 415 which I will be teaching in Spring, 2022: 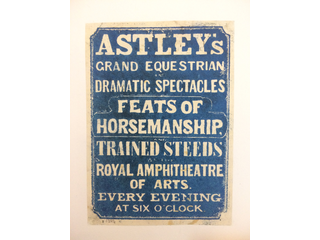 “Songs, Spectacles and Circuses in the Long Eighteenth Century”

This course will take a closer look at popular entertainment in late eighteenth- and early nineteenth-century Britain with a particular focus on performance and mediation. We will start by looking at songs and song culture of the eighteenth century as well as the curation of songs in printed works. After a brief foray into the royal theatres (Drury Lane and Covent Garden) and opera venues, we move to examining pleasure gardens (Vauxhall and Ranelagh) and so-called “illegitimate theatres.” We end the course with a focus on “circus,” the genre created by Philip Astley in 1768 to highlight his equestrian skills. The literary texts we examine include collections of songs, pantomime plays, melodramas, as well as novels such as Frances Burney’s Evelina (1778) (which portrays the young heroine’s perspectives on London theatrical entertainments) and Walter Scott’s Rob Roy (frequently adapted and performed for the circus). We will also spend quite a lot of time rooting around in old newspapers to see the kinds of other crazy entertainments that were popular at the time (“philosophical fireworks” or “trained bees” anyone?). Secondary critical materials will be drawn from media studies, performance studies, the new musicology studies, soundscape studies, and cultural memory studies. Students will be trained in and use the Omeka software and will work on an online exhibition of primary materials regarding early circus that they analyze in this course. 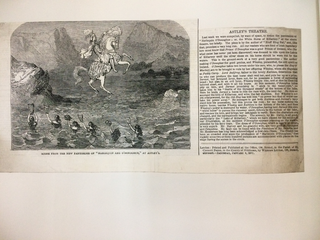 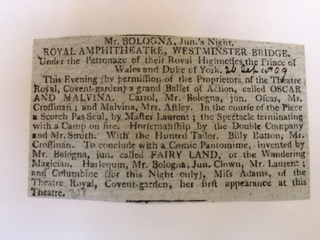